Following on from the post on Firsts, here are some ways of looking at “lasts” in the Library.

Here are the very last shelves in the main sequence. This is where we have the last part of our collection on bibliography, library science, and information resources, which is classified under Z in the Library of Congress scheme. This collection is a useful resource for students of a range of disciplines including English and Computer Science.

Last shelves in the main collection

The last entry in the alphabetical sequence of titles is Zykovs, one of the works which make up Maksim Gor’kii’s The lower depths, and other plays, translated by Alexander Baksky in collaboration with Paul S. Nathan (New Haven; London: Yale University Press, 1959.)

The last personal name listed alphabetically in the catalogue is Richard Zywotkiewicz, who wrote the screenplay for the 1999 film A Twist of Faith, directed by Chris Angel: the Library holds a copy of the 2000 DVD.

For more A-Zs in the Library, why not check out the A-Z of electronic journals and the A-Z of databases?

Libraries aren’t just about books, and they’re not just about words. Information can be passed on by images and by physical objects too, and the Thames Tunnel diorama is a great example of this.

This “peepshow” or perspective diorama is made from a set of printed cards, fastened together in such a way that, when expanded, they are at set distances from each other. The whole thing can be folded flat for storage, but ours has a bespoke box so it can be safely displayed in its expanded form and used as its makers intended. The viewer looks through one or both of the holes in the front image, and is transported into the interior of the tunnel, the set of two-dimensional images transforming into the illusion of a three-dimensional view. 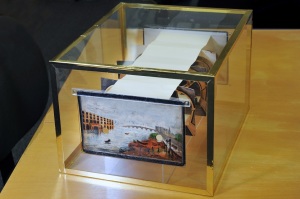 Those who wished to were thus able to see at least an artist’s impression of the interior of the famous tunnel without having to venture there themselves. The diorama allows us today to see how the tunnel might have looked in its original state, designed for horse-drawn vehicles and not yet a route for trains.

The Thames Tunnel, connecting Rotherhithe and Wapping beneath the river bed, was the first tunnel to be successfully built beneath a navigable river, and pioneered “tunneling shield” technology invented by Marc Isambard Brunel and Thomas Cochrane. Brunel’s son Isambard Kingdom Brunel was heavily involved in the project.

When the tunnel and its entrance shaft opened to the public in 1843, they were immensely popular. The entrance and the tunnel itself had sideshows and souvenir shops, and attracted a million visitors in the first three months. The view seen through this diorama is less dramatic and bustling, but shows pedestrians, dressed in the high fashion of the time, admiring the new structure.

The tunnel itself now forms part of the London Overground network, and the entrance shaft forms a concert venue. For more information see http://www.brunel-museum.org.uk/. 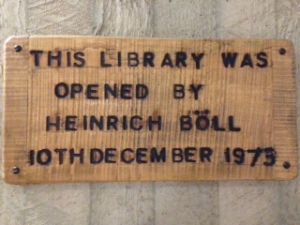 A modest wooden plaque on the first floor staircase of the Library represents the tangential coming together of two giants of the literary and artistic worlds at Brunel. As Brunel University developed its Uxbridge campus in the early 70’s, the creation of a new Library building brought sculptor and artist Joe Tilson to the site. Often named as one of the early innovators in the British Pop Art scene, Tilson initiated what was to be a long tradition of art in the Library in the commission and creation of huge wooden sculpture called Relief Murals that still adorn the main stairwell.

For the official opening ceremony in December 1973, acclaimed German novelist Heinrich Böll, was aptly invited to perform the honours. Böll, who the previous year had been awarded the Nobel Prize for Literature for, amongst other things, “contributing to a renewal of German literature”, was a former bookseller and author of several novels concerned with the struggle of the individual against repressive situations. His prestigious attendance at the opening was an auspicious start for a university library. No less significant than the Nobel, Böll was also awarded an honorary degree from Brunel the same year.

The Library that Boll opened was situated in a very different campus from the one we know today. Few students had made the move to what was then a fairly unpopulated and un-landscaped campus. Indeed, when the Library first opened there were not enough books to fill the shelves and the Library hosted yoga classes and art exhibitions in the remaining space.

In a nice touch Tilson crafted the panel to commemorate the event and accompany his murals. If you look closely at the panel you can perceive the strange shape of the letter 3, which was burnt into the wood by Tilson with a hot poker.

This small plaque marks a major moment in Brunel’s history.

Gilbert Blount was an English Catholic architect born in 1819 and active from about 1840-70. He received his earliest training as a civil engineer under Isambard Kingdom Brunel (c.1825-28) for whom he worked as a superintendent of the Thames Tunnel works. After a period in the office of Sydney Smirke, Blount was appointed as architect to Cardinal Wiseman, the Catholic Archbishop of Westminster.

The Blount archive held in Special Collections covers Blount’s early career, including correspondence with the Brunel family. It was given by Michael May, his grandson, in 1976.

The collection includes diaries, notes on engineering subjects, and letters to, from, and about Blount. The diaries give an intriguing insight into daily social life in Blount’s time, but also show aspects of this thought processes and work; there are jottings of various kinds in margins and flyleaves, and drawings of mechanisms and architecture. 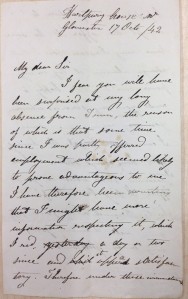 Draft letter from Blount to Brunel

Item 17 in this collection is a draft of a letter from Blount to Brunel, resigning his work on the Thames Tunnel in order to take up what he describes as “employment which seemed likely to prove advantageous to me”. The frequent crossings-out and changes of phrase shed light on Blount’s thoughts as he wrote, as well as on business etiquette of the time. For comparison, here is his diary entry for the same day as the letter was written, 17 October 1842 (the bottom entry on the left-hand page). He notes, with characteristic lack of punctuation, “Rose 7 1/2 wrote a note to Sir I Brunel acquainting him with my intention to leave his office I went out shooting with the keeper went to bed 11 O’c.” 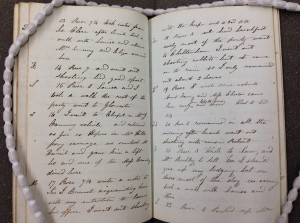 Other archives concerning Blount are at Birmingham Archdiocesan Archives and the Architectural Archives at the University of Pennsylvania.